The whale surfaces in The Blessed Capital for one night only. 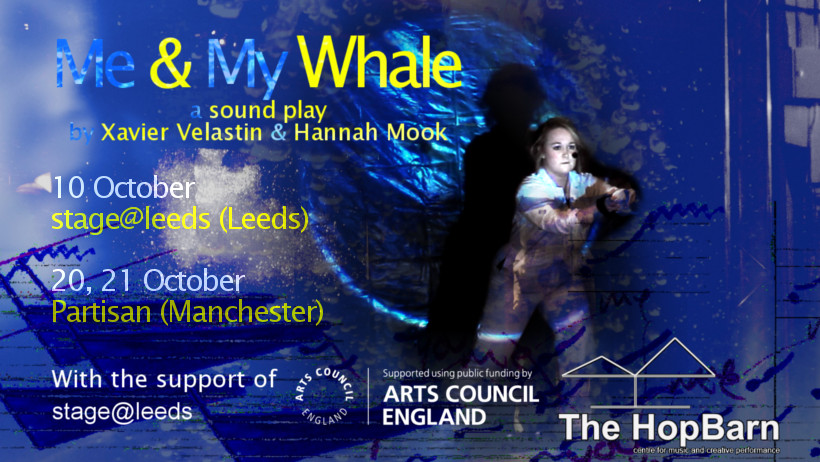 The R&D is over! We had an excellent sharing at Partisan in Manchester.

Just want to do a quick shout out to those who have been part of the Whale’s journey and where it will go to next. Me & My Whale has been in development, in one form or another, since August 2016.

Now we’ve developed the piece, we’re going to try and find a way to show it in lots of interesting spaces. Anyone got any ideas or links hit us up via the contact page. Particuarly if you own a submarine. 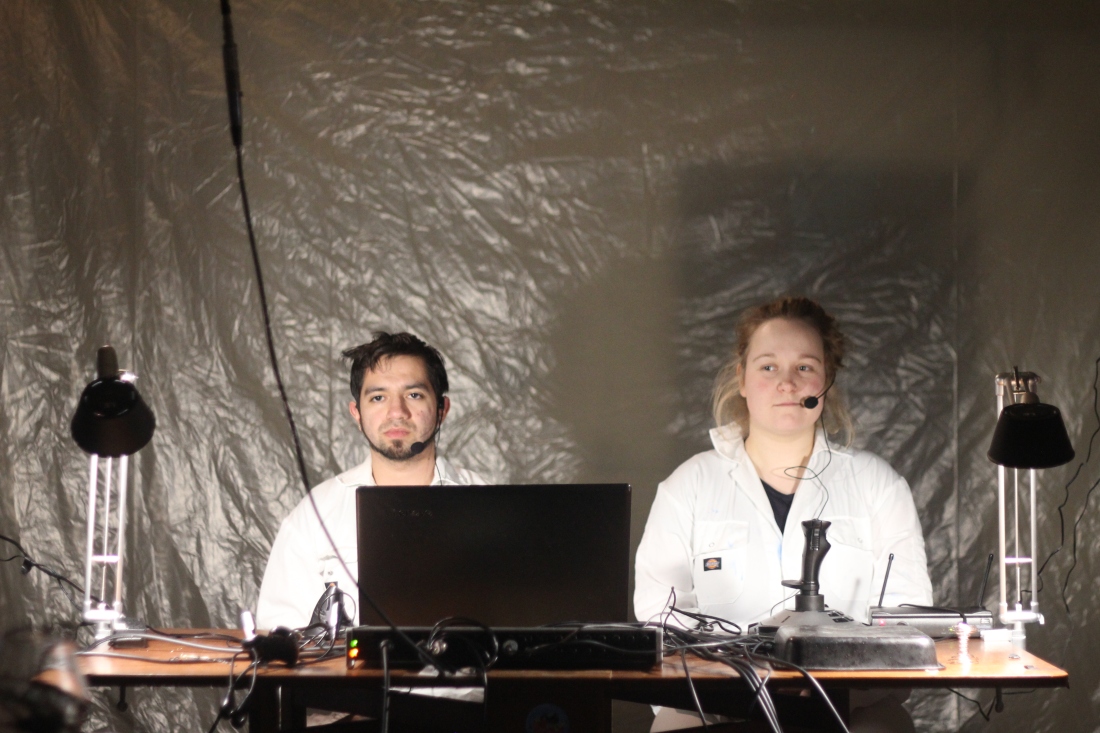 Very happy to share that we have confirmed our slot for our end of R&D sharing at Partisan in Manchester! Mook and I will be presenting what we’ve been working on since September. After that we will be planning what 2018 – aka The Year Of The Whale – will look like. If you’ve been following us, we’d love to hear what you think, to shape the future. But let’s make a piece first.

Tickets can be reserved from meandmywhale.eventbrite.com, or you can pay on the door. Entrance is £4; no-one turned away for lack of funds.

If you’re that way inclined, head over to our event page on facebook: Me & My Whale ~ A Sound Play, and please do share it out!

Please note the venue is not wheelchair accessible.

Bonus: some experiments with a contact mic and metal So we did our sharing at Live Art Bistro last Saturday! The performance came out at just under an hour (managed with some brutal cutting) and apart from some moments of horrendous feedback, it actually worked out. It was really rough around the edges, obviously, but it was fun and, after a long and stressful day setting it up without a run beforehand, it was such a relief that it went well.

More people than we expected turned up, and we had an interesting chat after, where people gave their feedback. The things that came up were:

All in all, good feedback. I have a list of about a million things to work on aside from that. But the two big things that came up for me during the work in progress performance were music and narrative. I’ll talk a bit about them now, because that’s what blogs are meant to do.

Music
One of the things I really liked out of this was our variety-show-style singing of the theme song, written by our composition advisor Anna Clock.

Our singing isn’t perfect – I have a musical ear but a shit voice, Mook has a great voice but finds pitching some of the whole-tone intervals tricky – and I think we need some proper vocal effects on the microphones so it doesn’t sound so dry, but aside from that, people really responded to it. I’ve also been humming it to myself pretty much constantly since then. When we do it well, I’ll put a recording up for your listening pleasure.

Sometimes, when something is just good or fun it doesn’t need a huge amount of justification. I know it’s unclear why we’re doing this (see below for why I don’t care), but I like the idea that us as narrators get carried away with the story so much that we choose to do a song and dance about it. We break from either our voices as weird arbiters of the ocean or the submarine captain herself to do something that is, to be honest, way more like how Mook and I play around generally – silly, a bit creepy, and desperately grabbing the spotlight. One of the things we noticed was that we’re both pretty playful people making work that’s really cynical and depressing and it’s nice that we get to show a bit of fun. I’m currently working on a lounge jazz piano version.

Right. My personal attitude to narrative are a bit confused. I do like how this iteration of Me & My Whale is telling a story a lot more, and I do like the story. I know it’s something that Mook and Anna want to push. It’s way more accessible, it’s something an audience can grab onto even with complicated/unfamiliar images and sounds, and it doesn’t have to be at the compromise of complexity or content as long as it’s done cleverly. Maybe it’s because I’m not so confident of my writing that I can see how it can be done in conjunction with hidden, complex generative processes. It needs to be calculated very carefully because at the end of the day, if you watched a hundred number of monkeys trying to write macbeth you’d just end up with a faceful of poo. I think my problem is that I find it more interesting to enact the attempt to tell a story, especially when it’s a good one, because that way we’re constantly fighting and trying, literally battling the medium itself. One way we could do this is to apply a score to the performance, generated maybe by the audience, by cetacean migration patterns, by the resonance in the room, through a written score or by the pattern of cables in the space. However we do it, it would be partly within our control and partly as a result of leakage from the performance event itself. I think it gives some really exciting possibilities to look at agency and choice itself – something that can be mapped onto the consequences of stealing voice from people, ideologies and nature.

As an absolute nerd, I actually don’t really care much for the idea of understanding everything in one sitting – I’d rather it be a case of the moments, images and sounds staying around in the audience’s brain so people can have a more gradual understanding of what we’re trying to say. One of my more complex pieces with choreographer Deliah Seefluth, The Poem Of The Body, had a small set of materials (broken spoken word) triggered using gesture with motion capture controllers, whose parameters were adaptive, randomised, and difficult to predict. Part of the performance was in actually finding the poem itself, and it wasn’t something that you could just memorise and replicate. I think the obsession with making pieces for snapchat-length narratives with instagram-level depth has directly to do with a neoliberal idea of monetising our attention. Maybe it’s just me, but the experiences that have really moved me in an intellectual capacity have had to do with me coming back to it over a long period of time in my own head, or re-watching/listening. Like reading Foucault or Maria Mies, or listening to SOPHIE, Death Grips or Debussy’s Preludes for the first time, it was only over a long time of active and inactive engaging that they actually became meaningful. I don’t think theatre people are like that very much, not really. It’s worth mentioning that of the feedback I’ve received since the very first Whale (done at Goldsmiths in Sep 2016), the only people who cared about understanding narrative right away were people of traditional theatre background. Even if you go all john cage later, you still want that quick fulfilment, I guess. I’m a bastard.

At the moment, it’s a play with good sound design. I have a feeling that that’s where it’s going to go, and that’s not bad at all, it’s just different from how I started out. Anyway, it made total and complete sense to make a good story up for this sharing – & having Mook on board has meant the submarine captain is someone you actually like, as opposed to my writing which is just horrendous. We’re still in the pretty early stages of our devising together and I’m really excited to find out where it might go next.

So we’ve been hard at work preparing for the work in progress this Saturday!

Using edits and feedback from our remote advisors Lawrence & Matthew, and with the amazing help of our advisors Anna and Dimitra in the rehearsal space over the past week, we’ve been building up a performance for Saturday’s show: 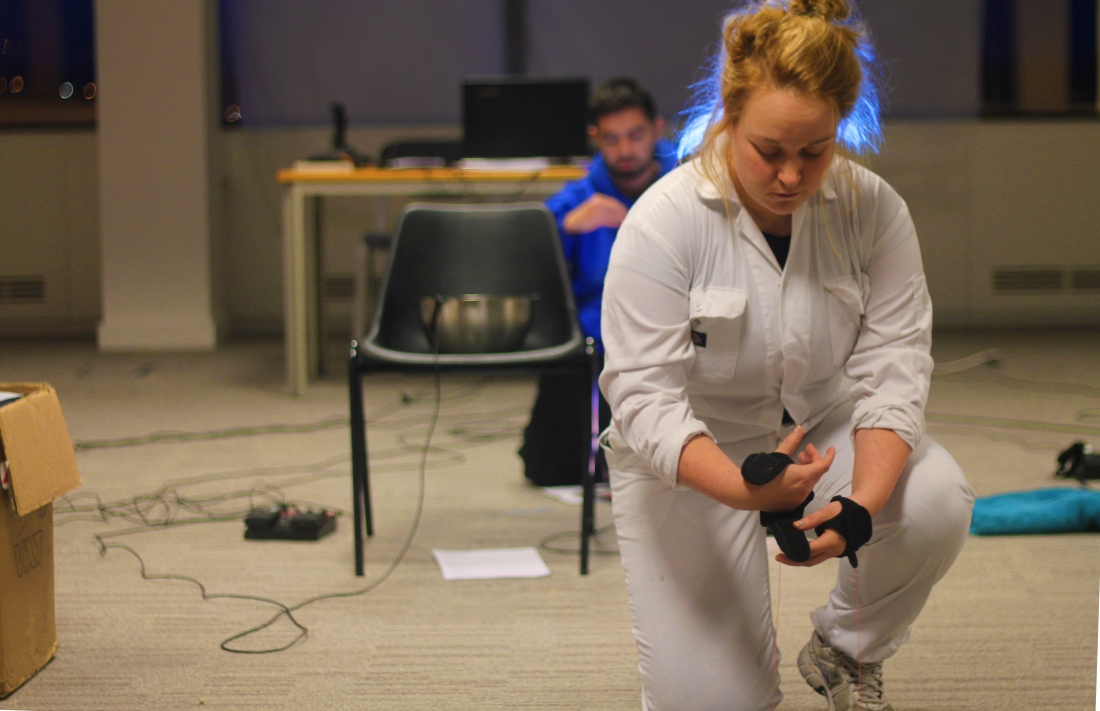 Me & My Whale is a project that, like its subject, is an absolute leviathan. By setting our aims to incorporate different approaches to composing, devising and performing, by setting our goal to couch it inside a cross-temporal and generative framework, we’re trying to create a new form of expression. For now, we’re telling a story – about the lonely submarine captain who falls in love with a whale. That’s what we’ll enact through body, sound, image, text and form on Saturday. If you can, come down!

SubAquatic Soundscape: One of the defining aspects of the sound design is that each scene’s sound is built up by manipulating the previous scene’s sound, or by building new soundscapes using a mixure of microphones, hydrophones, human-computer instruments and synthesis. This is an extract from one of the hydrophones setting up the submarine acoustic.

ToneHarm: a patch which detects the pitch of an incoming voice and then matches it with six sine tones, creating a sort of echoey delayey followy feeling. Needs work to make it nicer, but I like the difference between the soft, thin sine tones and a rich, harmonic-filled voice.

Bring on the Whale!

Me & My Whale is a performance project which incorporates expanded approaches to text, theatre, music and programming to ask questions about the modern ownership of the natural world and our impending apocalypse.

It follows a military submarine captain at a crucial point in a bloody future war. Her ship is equipped with an untested acoustic weapon, which she has been ordered to detonate over the enemy capital. However, at the point when she must surface, she falls in love with a whale. Caught between her duty and her amygdala, we see many futures – generated procedurally through a performance-based interaction with reactive, live programming.

Originally written for Xavier’s (who?) dissertation for a masters in music, new life has been breathed into the project with the help of Mook (who?) and the support of Live Art Bistro, The HopBarn, The Royal Exchange Theatre and Arts Council England, who are, frankly, mad.

This will be a straightforward blog, for anyone interested to see what we’ve been doing, and for its future life in 2018 (aka the Year of the Whale). It is my fond hope that one day it will take its place alongside Napoleon’s war diaries and the memoirs of Julius Caesar.

All Posts by Date